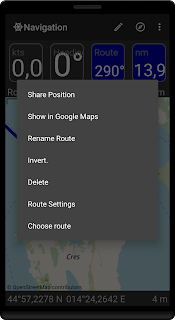 The edit - view has been completely refactored. The buttons are gone, you now use tap, long tap and double tap to create and edit routes:
Create waypoints by tapping on the map. The app adds it to the route. If you tap next to the route a new waypoint is inserted between the waypoints next to it, otherwise appended to the end of the roude.
You move a waypoint by pointing at it and drag it to it's new location. The route is changed accordingly.
Delete a waypoint by tapping on it. Routes are saved automatically at your device.
GPX Import
Boatspeed now registers for handling gpx tacks and routes, and should be shown as an app for opening these files in the corresponding system-dialog.
The gpx-tracks and routes are shown in the navigation view. For performance reasons the mumber of waypoints to import is limited to 70.
Open to Google Maps
If you have Google Maps installed on your device you can now easily open any point at the map to Google Maps by long tapping at it.

When tracking and not using your phone for a certain time the system will go into a battery-save-mode and stop all applications and background services, including tracking. In this case tracking won't work until you wake up your device again by  switching it on and starting an app.
To avoid this we give you the possibility to exclude Boatspeed from battery-manager and provide you with a dialog and shortcut link. For security reasons we can't free Boatspeed directly from battery manager, and maybe you don't even want it. Anyway you can do it easily now.
Removing the app from battery management might help with the problem, but it is not garanteed. Most devices also seem to disable gps and location services while sleeping, and in this case boadspeed tracking might even start but not get any data. And unfortually ther seems to be no way to exclude the location services from battery - management.
Get Boatspeed at the Play Store.
Find the full documentation.
Boatspeed Soft